Fifty years ago, there were really only two places for adults with developmental disabilities to live in Canada: with their family or in an institution. In 2014, we know that the best place for people to live is in their community, but, sadly, there are still too few living options for people who have intellectual disabilities. Many adults still live at home with their parents, others share homes with families in their community, but very few have the option to live in a home of their choosing with people they want to live with. As it is now, many families are being pushed into crisis as they support their adult children into their 20s, 30s, and beyond. 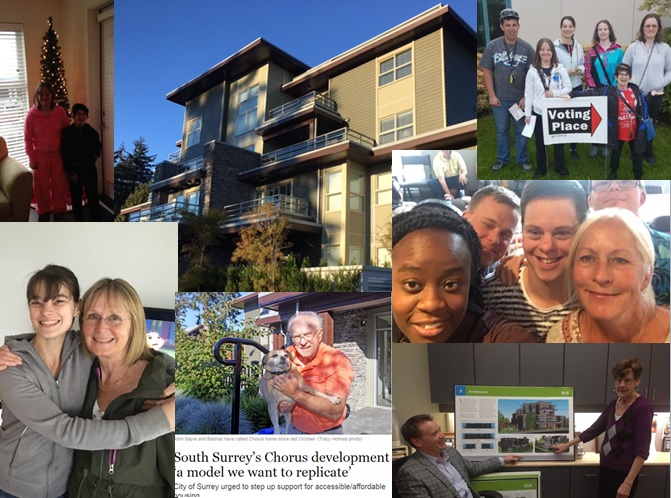 When I speak with people who have intellectual disabilities about housing, they overwhelmingly say that they would prefer to live in their community, close to their family and friends, with good transit access for shopping and employment. This was also the case 14 years ago when my predecessor, Paul Wheeler, brought a group of young people and their parents together to find out how they would like to live. The information that was gathered back then was used to develop Chorus, an inclusive and affordable 71 unit apartment in South Surrey that is owned and maintained by Peninsula Estates Housing Society, a partner organization in UNITI.  Chorus opened in August of 2016 with 20 rental homes for people who have intellectual disabilities and 51 for the general public at affordable rates. I’d like to share some of the key learnings we’ve had through the development and running of Chorus:

It’s clear to me that people with intellectual disabilities have a right to live where and with whom they choose. UNITI will continue to support this right. What I’ve really enjoyed about the Chorus project is how the tenants who have had their housing rights addressed have taken on the responsibility of having their own home. Whenever I have visited with them, I have found their homes neat and well-cared for. Now that they have their own home, they are inviting family and friends over to their place for meals and visits: they are sharing their bounty with others.

PEHS’s experience as a landlord for tenants with intellectual disabilities has been a good one because the tenants have been responsible and SHS has provided support for any tenant issues that have arisen. As more people with intellectual disabilities claim their right to live in the community, landlords need to know that being inclusive is a positive for their rental properties.

May 27 to June 2, 2018 is National AccessAbility Week. LandlordBC promotes access to safe, stable and inclusive housing.